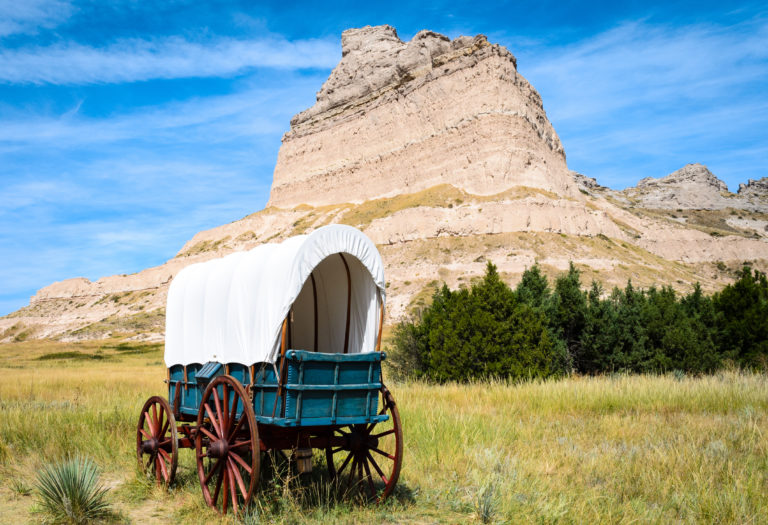 Come explore Western Nebraska on Buffalo Bill’s Rails & Trails. You’ll learn about Bill Cody the man who first commercialized the Wild West, about America’s Westward Expansion on the Oregon Trail and native wildlife such as Buffalo and Sand Cranes, but most important you’ll share a uniquely new trip with your group.

Day 1 – Lincoln, NE – Today, you travel to Lincoln, NE. On arrival, check into the Lincoln Marriott Cornhusker Hotel.
Tonight at the hotel, enjoy The Dinner Detective. Solve a hilarious crime while you feast on a fantastic dinner. Just beware! The culprit is hiding in plain sight somewhere in the room, and you may find yourself as a Prime Suspect before you know it! (D)

Next, you tour the Petrified Wood Gallery, featuring a fascinating collection of art made from petrified wood and fossils by two octogenarian twin brothers. Some of the most fascinating pieces in the gallery are the hand-crafted petrified wood figures made by the brothers. They create these detailed artifacts, many made to resemble Old West buildings, with tiny pieces of petrified wood all painstakingly glued together.

Then you visit the Mansion on the Hill. An authentic Victorian style home, the Mansion on the Hill was Ogallala’s finest residence when it was completed in 1887. Today, it is listed in the National Register of Historic Places. The mansion has many unique features, including ten foot ceilings, sixteen inch thick solid brick walls, walnut shuttered windows, and solid brass hardware throughout.

Check into your hotel for the night followed by dinner at the Front Street Steakhouse & Saloon. Enjoy a Double Ranch Hand Buffet dinner followed by the Crystal Palace Revue. Its roots in the ’60’s with gun fights, dance hall girls and some great songs (Revue available in the summer only). (B,D)

Day 3 – Chimney Rock – Scotts Bluff, NE – Departing Ogallala this morning, stop at Chimney Rock National Historic Site for a photo opportunity. Discover one of the wonders of the West. Feel the awe and curiosity the pioneers experienced when they saw the most famous landmark on the Oregon, California, and Mormon Trails.

Then you visit the Wildcat Hills Nature Center offers visitors a chance to discover this pine-clad butte range. Through interactive displays, uncover the common plants and animals that call this area home. Bird viewing is a must at the Wildcat Hills. It boasts a large viewing area with several feeders and a view overlooking the North Platte River valley.

The afternoon features a stop on the Oregon Trail at the Legacy of the Plains Museum, an impressive collection of pioneer and early community artifacts, antique tractors, and farm implements; an 80-acre working farm; historic farmstead structures; and striking views of Scotts Bluff National Monument, which towers 800 feet above the North Platte River. Scotts Bluff has served as a landmark for peoples from Native Americans to emigrants on the Oregon, California and Mormon Trails to modern travelers. Rich with geological and paleontological history as well as human history, there is much to discover while exploring the 3,000 acres of Scotts Bluff National Monument. You also have a photo opportunity at Scotts Bluff itself.

Check into your Scottsbluff for the night. Dinner is included tonight at a local restaurant. (B,D)

While in Sidney, visit the “Boot Hill” Cemetery, which has existed since 1868. It was first created to bury soldiers of Fort Sidney, who died in gun battle. Sidney eventually became the wildest old west town on the rugged untamed frontier with many colorful characters. Frontier newspaper editors and publishers called this lawless burgh “Sinful Sidney”, “Wickedest Town in the West”, “Toughest Town on the Tracks” the “Hardest Hole” and even the “Magic City on the Plains.” Thousands of gold seekers, cowboys, soldiers, desperadoes and freighters frequented the town from 1876-1881.

Next, visit Camp Lookout, the oldest building in Sidney and perhaps the entire western Panhandle of Nebraska. The structure was built in 1867 to house soldiers from Fort Sedgwick, Colorado, who set up an outpost along Lodgepole Creek to protect railroad workers pushing the Union Pacific across the plains. Later known as Sidney Barracks, it eventually became a lodging facility and then a private residence after the Army pulled out in 1894.

Continue travel to North Platte, NE for the night. Dinner is included this evening at a local restaurant near your hotel. (B,L,D)

Next, tour the Great Platte River Road Archway. Built over the top of I-80 this is best described as a splashy, brassy history museum that uses film, computer graphics, light and sound, life-size dioramas, re-enactors and classic cars to document over 150 years of transportation and communication across America.” The Archway brings the westward migration to life.

Then you visit “Scouts Rest” the home of famed showman scout William F. “Buffalo Bill” Cody. Now it is the Buffalo Bill Ranch State Historical Park and it recaptures the life and career of the famed Pony Express rider, Army scout and buffalo hunter-turned showman. Since it became a state historical park in 1965, the house and barn have been restored and a wealth of Cody memorabilia has been acquired and placed on display.

Continue travel this afternoon to St. Joseph, MO for the night. Dinner is included this evening at a local restaurant. (B,D)

Day 6 – Walter Cronkite Memorial – Depart for Home – Following breakfast, visit the Walter Cronkite Memorial. It was the vision of Dr. Robert Vartabedian, President of Missouri Western State University, to create a fitting memorial to St. Joseph’s beloved native son and one of the most important and trusted voices in our country’s history. Dr. Vartabedian’s vision was captured by Missouri Western art faculty members Eric Fuson and David Harris, who designed the unique artistic display illustrating Cronkite’s distinguished career with CBS television. Lunch is included at the cafeteria before departing for home. (B,L)